Get me outta here!

With Daddy being home for the week, there were many jobs to be jobbed, and games to be played as a family. We joined him and Squirrels grandad in the garden while they worked in the garden; we put up the teepee, had a play in the sandpit and between little visits over to lend a hand with their work, we embraced an opportunity to do some mathematical thinking and visual identification.

We started by rolling out lines of twine and rope, then also a decorative string which I put together for his 1st birthday last March, conveniently, woodland themed!

It was one of those glorious moments, despite a horrid day of tooth cutting and a hundred other distractions, that he grasped a concept that I thought would be beyond him. I had a merry little high five with him, and shared the moment with daddy.

Together we went looking for more lines, and found quite a few!
Squirrel found some long grass, and laid them down with the rope and twine, i found a collection of sticks which Squirrel chose from to add to the collection.

While i hunted for more line-like things in the garden to show Squirrel, he wondered off and found some more lines himself! 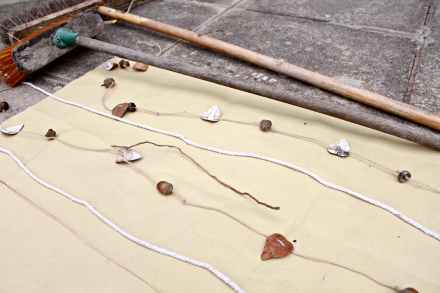 Two garden brooms, added to his collection and laid down parallel to the rest by himself. He gave himself a little clap, called for daddy to see, spent some time lifting and relaying the lines along the paper or the grouting between the patio, then dropped everything and informed me of his desperate need of a breadstick, so wrapped up the activity and went for lunch.

A short activity that lead us to an insight of how Squirrel picks up particular concepts quite effortlessly compared to how i believe he will do, and that really suggests to me how much more we can explore in this field of explorative thinking and solving.