Get me outta here!

I’m going to admit now, that Squirrel wasn’t sold on this activity as a craft, but was all for experimenting with the materials. This week he has been far more exploratory than creative, so anything with any kind of final, specific artistic target has just not appealed to him, and even repeated invitations to craft have not kept his attention beyond simply ‘freestyling’ with the materials. I have let him go for it, and encouraged his investigations, while tootling along and trying to weave in any of his hands-on play with the materials into the craft. 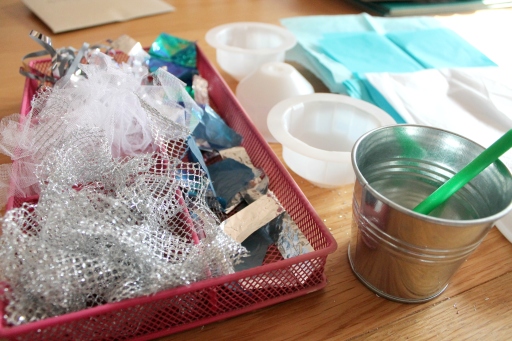 We used:
Clean plastic dome shaped pots from the art scrapstore.
Tissue paper in white, sky blue and azure.
PVA glue.
Various strips of vellum, netting and foil streamer.
Blutac and twine to hang it from.

Firstly, i laid out the tissue paper and encouraged him to tear it up into pieces, demonstrating with each larger sheet and handing them over for him to have a go.
I then handed him a glue spreader and a pot, and showed him how to spread glue onto his pot by demonstrating with my own.

As it turns out, Squirrel was having a handsie day, and the spreader soon got flung away while he opted for a more sensory approach of smooshing it around with his fingers.

I started sticking bits of our shredded paper onto my own pot, emphasising the process with clear actions and descriptions.
Which he followed… Then ripped back off, then repeated, then ripped off, and again, and again. 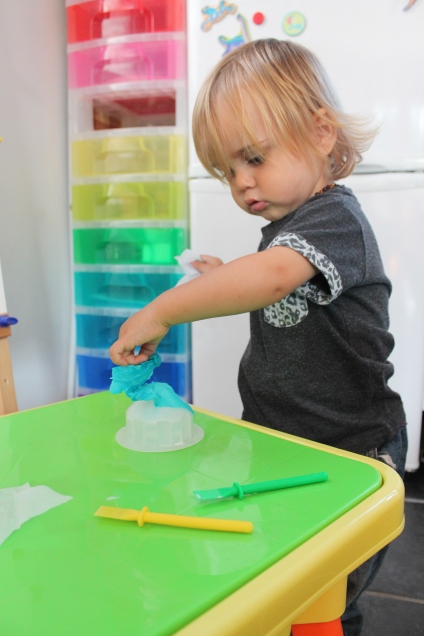 Like i was saying, freestyling. Having a little singsong, stuffing paper into his mouth to shake around like a happy puppy, just doing his own crazy conga. Just not much into the layering that i was intending, but its all learning!

The whole plan somewhat crumbled after our ‘tenticles’ appeared. In delighted squeals he scurried off with them and tried to put them on his head/feed them to the cat/stuff them into a bucket- “Aha!” i thought! “I wonder if i could encourage him to stuff some into our jellyfish body?” 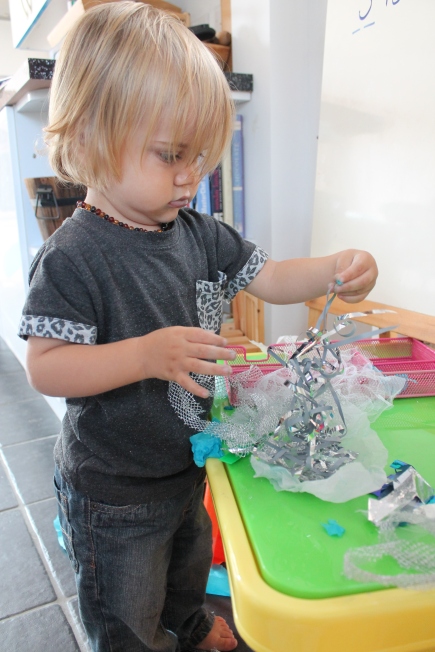 “Kinda” was the answer. I filled the body with a puddle of glue and called him over, offering the pot to him and suggesting he put some in there, which he did.
Before promptly whipping it back out again, then in again, etc. 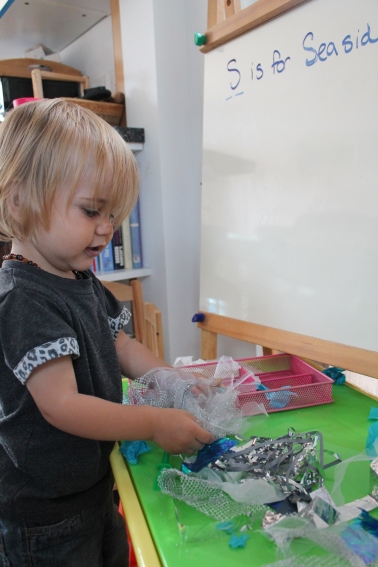 Weeell, its his craft, he was feeling his own crazybutt rhythm, i let him follow his own groove, and eventually found a few tenticles hanging out of the jellyfish body which had been deserted on his water table while he had scrambled off to make a nest with the rest.

I added a little more glue and a couple more strips and left our jellyfish to dry upside down for a day.

When he had dried, i added a little blutac and a length of twine and it hung up alongside the blackboard display. Squirrel has since noticed him several times and always makes little noises of awe, particularly when i blow against it and the tenticles flurry.

We watched some jellyfish videos on YouTube while holding the jellyfish in his line of vision, and i do believe there is a little association there, but nothing to match the exuberant displays we are treated to when he has recognised a crab through this past unit! But then, crabs are cool comparably- who can blame him!

This activity is part of Unit 1, The Seaside and Rockpools.